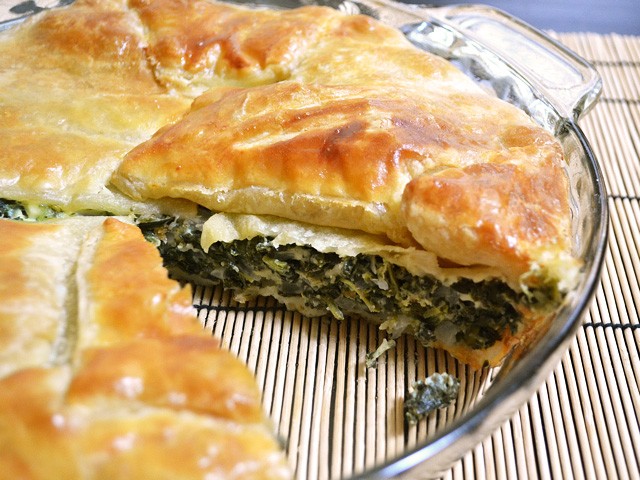 Mmmmm… I LOVE spinach pie. Whenever I eat at Greek restaurants, I always make sure to order some spanikopita. I love the flakey crust and the rich, warm, spinach filled interior. Popeye totally knew what was up.

This spinach pie isn’t really Greek flavored, but I love it all the same. There are many, many ways to make a spinach pie and this weekend I was most interested in finding the fastest, easiest route to this spinach heaven.

My mom made baklava fairly often when I was growing up and ever since watching her wrestle with those finicky phyllo dough sheets, I’ve never wanted to go near them. So, for this recipe I chose puff pastry. It’s much thicker and way more forgiving than phyllo, but you still get a nice flakey crust. Puff pastry is definitely not inexpensive, but most of the other ingredients in this recipe are, so the overall cost per serving remains low. Puff pastry can be found in the freezer section, usually near frozen fruit and other ready to eat desserts. For this recipe I only used one sheet out of the box. The other sheet can be wrapped tightly and re-frozen for later use.

You can make spinach pies in a square, or as individually folded rectangles, but I like this easy “fold over” pie dish method. No cutting the dough, simply roll it out, fill it, and fold it over top to make the top crust. Super easy.

I stuck to a basic cheese and spinach filling, but this recipe is just asking for a million variations. Add some feta cheese for a Greek flare, green onions or other fresh herbs for a fresher flavor, or you can even try adding something tangy like sun dried tomatoes. Of course, more ingredients mean higher cost, so try to use ingredients that you have laying around waiting to be used up.

1 Tbsp olive oil
1 small yellow onion
1 clove garlic
1 cup cottage cheese
¼ cup parmesan cheese
⅛ tsp ground nutmeg
½ tsp salt
10-15 cranks fresh cracked pepper
2 large eggs
16 oz. frozen cut spinach
1 sheet (8 oz.) puff pastry
2 Tbsp flour for dusting
1 large egg (for glaze, optional)
Instructions
Preheat the oven to 375 degrees. Dice the onion into small pieces and mince the garlic. Cook both in a small skillet with 1 tablespoon of olive oil over medium heat until soft and transparent (about five minutes).
While the onions and garlic are cooking, prepare the rest of the filling. In a bowl combine the cottage cheese, parmesan cheese, eggs, salt, pepper, and nutmeg. Mix well. Before adding the spinach, strain it in a colander and press out as much moisture as possible (squeezing handfuls in a fist works well too).
Once the onions have softened, add them to the cheese/egg mixture along with the squeeze dried spinach. Stir until well combined.
Dust a clean work surface with flour and unfold a sheet of puff pastry onto it. Using a rolling pin, roll the puff pastry into a 12 inch by 12 inch square. Drape the rolled dough over a standard 9 inch pie dish.
Spread the spinach filling evenly inside the pastry lined pie dish. Fold the corners of the pastry back over top of the filling. It’s okay if they do not fully reach to meet each other. If desired, brush a whisked egg over the top (this will give the surface a glossy appearance after cooking).
Bake the pie for 45 minutes in a preheated 375 degree oven. Allow the pie to rest for about 5 minutes before cutting to allow the filling to set. 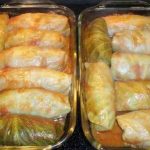