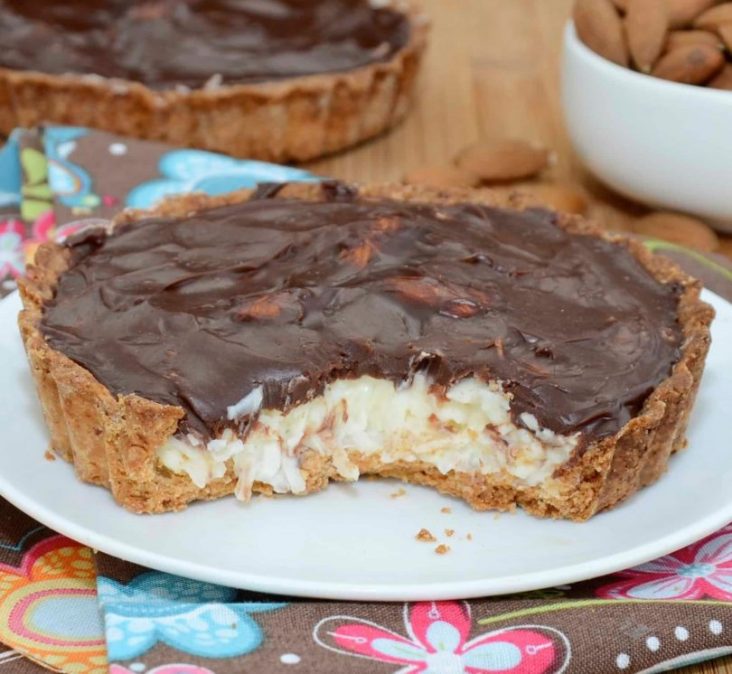 For the Tart Dough:

For the Coconut Filling:

For the Chocolate Glaze and Garnish:

How to Make an Almond Joy Tart

First Step: Prepare the tart dough. Use a small bowl and lightly whisk the egg then set aside. Then in the bowl of a food processor fitted with the metal blade, begin to pulse the almonds and sugar together until the almonds are finely ground. Combine the flour and salt and pulse again until just combined. Mix in the butter and pulse until sandy, about 6 to 10 quick pulses. Put in the egg and pulse just until the dough begins to cohere into a ball. Form the dough into a disk, wrap it tightly in plastic wrap, and refrigerate it for at least 1 hour or overnight.

Second Step: Begin making the coconut filling. Start by placing the white chocolate in a heatproof bowl. Then heat the cream in a small saucepan over medium heat until it is just beginning to boil. Next, pour it over the white chocolate and let stand for 30 seconds. Slowly begin to whisk the cream and white chocolate until smooth. Cover and refrigerate for at least 4 hours or overnight.

Third Step: To assemble the tart, you will need to dust a work surface with flour. Divide the dough disk into 6 equal portions. Then, roll each into a smooth disk that is 5 1/2 inches in diameter. Carefully and gently press each dough disk into a 4-inch tart pan with removable bottom.

Fourth Step: Put the tart pans in the freezer for 30 minutes. Then preheat oven to 375 degrees F. Line the tart crusts with aluminum foil, and fill each one three-quarter full with pie weights or dried beans. Then bake them for 15 minutes, then take out the foil and weights and bake for another 10 minutes or until lightly browned. Cool on a wire rack.

Fifth Step: Remove the white chocolate ganache from the fridge. Then place in the bowl of a stand mixer fitted with the whisk attachment. Beat the ganache mixture at medium speed until soft peaks form. Do not over whip. Fold in the coconut and the rum. Divide the filling evenly among the cooled tart shells, top each tart with 3 almonds. Then place in the refrigerator while you make the chocolate glaze.

Sixth Step: To prepare the chocolate glaze, place the chocolate into a medium heatproof bowl. Heat the cream inside of a small saucepan over medium heat until it is just beginning to boil. Pour it over the chocolate and whisk to combine well. Allow the mixture sit for about 10 minutes. Remove tarts from the refrigerator and add the glaze with a spoon, so it’s even over each one. Refrigerate the tarts again until glaze sets up for about 10 minutes. The tarts can be stored in the refrigerator for up to 2 days. Be sure to keep them covered tightly. 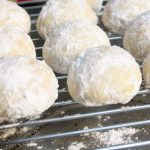