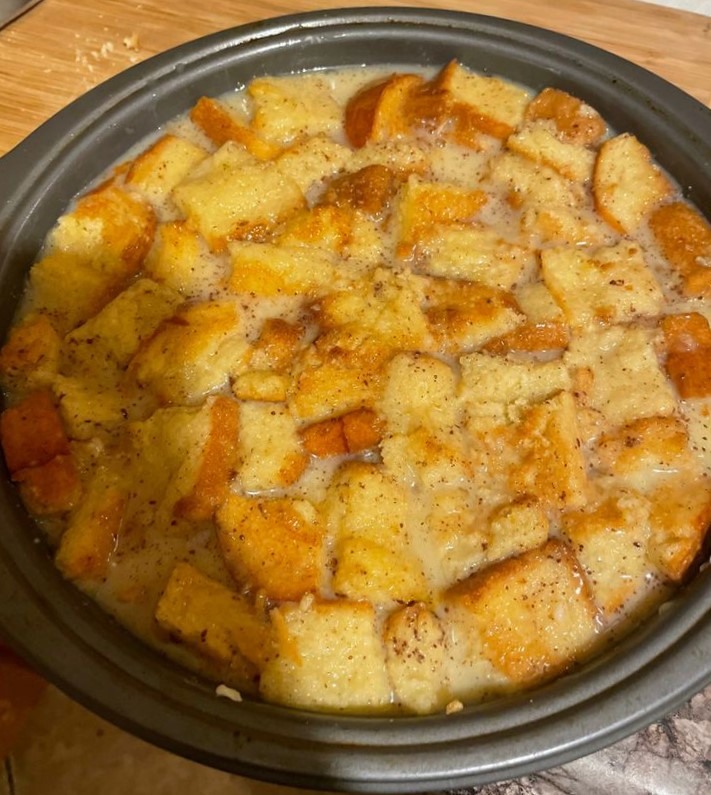 Old fashioned bread pudding with vanilla sauce is an easy and simple homestead recipe to use up eggs, milk and stale bread. Comfort food at its best – breakfast, dessert, or snack!

Jump to Printable Recipe Card
Old fashioned bread pudding is an easy and simple homestead recipe to use up eggs, milk and stale bread. Comfort food at its best – breakfast, dessert, or snack!

Bread pudding … I’ve noticed that people either love it or they hate it. It’s just one of those things.

Perhaps, though, you’re in that small chunk of the population who has never had it before. Oh, you don’t know what you’re missing.

Now before we delve into how to make bread pudding, let’s talk about why.
What’s so great about this recipe?

Why should you make this delicious, easy, frugal, old fashioned bread pudding recipe …

This is one of those farmhouse recipes, old-fashioned, simple, homey and oh-so-delicious, that a frugal housewife of long ago made quite often.

There are fancy recipes that have ingredients like whipping cream, expensive gourmet bread … this isn’t that kind of recipe.

There are three main ingredients – Eggs, Milk, and Bread.

Stale bread, to be specific, is the most important ingredient.

If you buy all of your milk and eggs from the grocery, and especially if you buy those fluffy mass-produced loaves of what my dad always called “baker’s fog”, then you might not consider any of those three frugal.

On the farm, though, and on the homestead, it’s something else entirely.

In the spring, when the hens are producing at full volume, it can seem like you’ll never use them all.

At the same time, your goats or cows are in full production, and there’s so much milk, you’re considering bathing in it.

And as for bread, homemade bread goes stale within a day, unlike modern commercial bread. So anything that’s not eaten in the first day must be made into something else.

Do NOT overthink this recipe. I used a full loaf of homemade bread that had been allowed to get a bit stale. If you have a bit more or a bit less bread, relax. It’ll work out.

Heat oven to 350°F. Combine bread and raisins in large bowl. Combine milk and 1/4 cup butter in 1-quart saucepan. Cook over medium heat until butter is melted (4 to 7 minutes).

Pour milk mixture over bread; let stand 10 minutes.
Stir in all remaining pudding ingredients. Pour into greased 1 1/2-quart casserole. Bake for 40 to 50 minutes or until set in center.

Combine all sauce ingredients except vanilla in 1-quart saucepan.Cook over medium heat, stirring occasionally until mixture thickens and comes to a full boil (5 to 8 minutes).